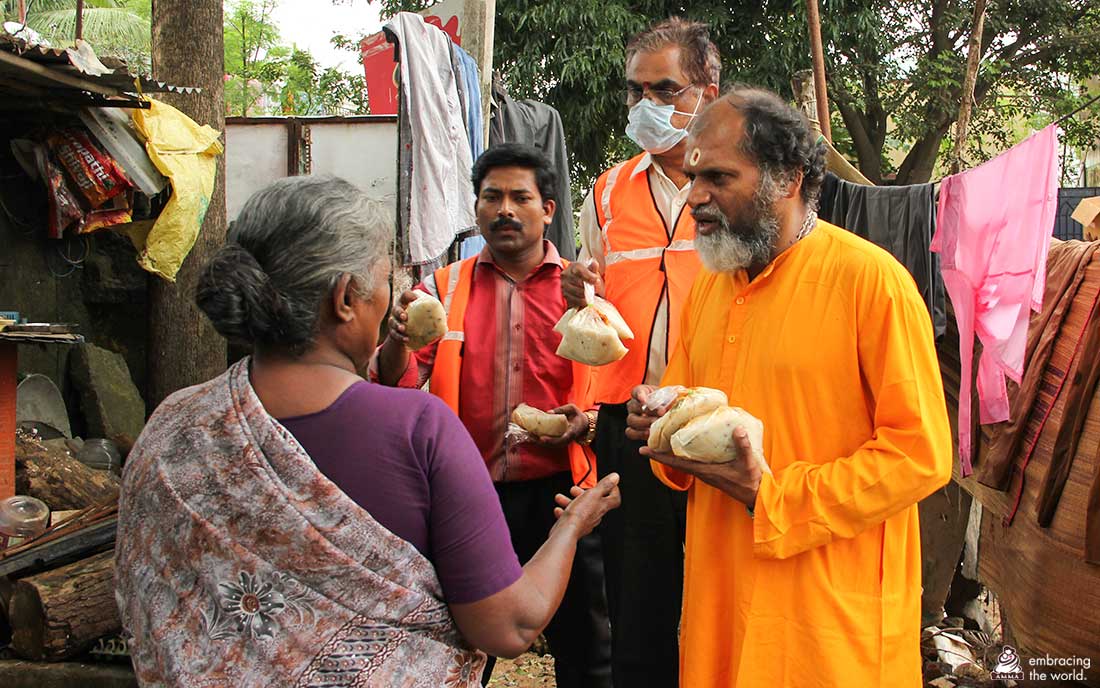 Natural disasters are happening more often and as the world heats up, their frequency and severity will only increase. The places hit hardest are often the least prepared - and the least equipped to bounce back. Our work includes immediate aid but then continues to long-term relief. In this way, we're helping vulnerable communities get back onto solid ground. Not only does this come in the form of food and medical aid, but also via scholarships, vocational training, and permanent shelter.

OUR WORK
Physical, mental and economic aid for those affected by COVID-19 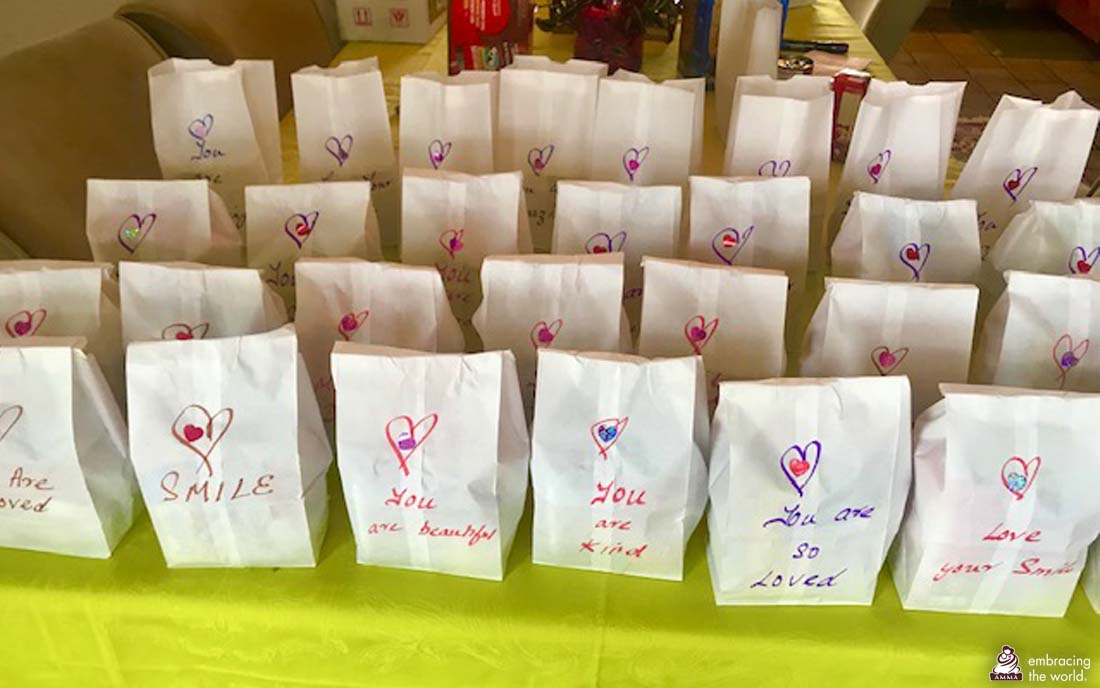 Embracing the World aid efforts started with a $1.7 million US donation to the governments of India and Kerala. Amma also opened the doors of Amrita Hospital in Kochi, Kerala to provide free treatment for COVID-19 patients.


Those initiatives inspired volunteers around the world to sew cloth masks at home during lockdowns so they could in some way help people in need in their communities - from the elderly in care homes to the homeless in city streets. Soon after, volunteers also began preparing food packages to deliver to people out of work and running low on income.

In August 2018, floods hit the state of Kerala. More than 500 people were killed and 1,000,000 displaced. Immediately, more than 400 volunteers formed Amrita Helpline - a 24-hour call-in center set up at the Amritapuri Campus of Amrita University.


We also sent volunteer rescue teams and emergency medical units to flooded areas and set up more than 30 relief camps. In addition, we donated $1,400,000 US to the state government’s relief fund.

OUR WORK
RUSHING TO THE AID OF FISHER FAMILIES 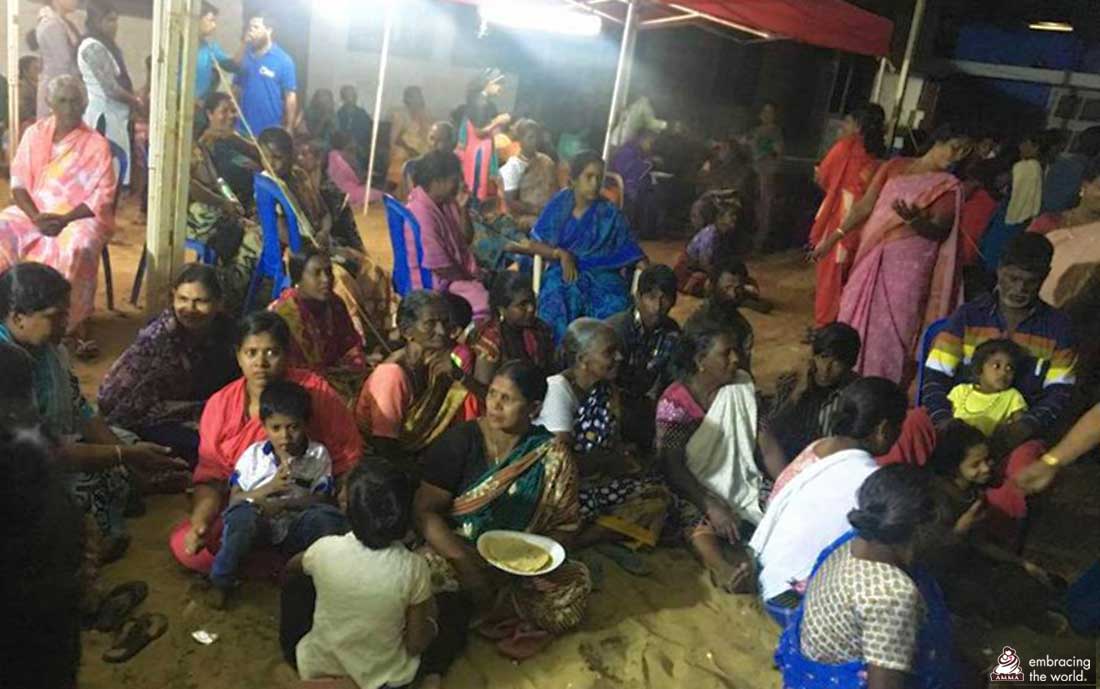 Cyclone Ockhi sped across the waters around Sri Lanka and South India - ripping down coconut trees, destroying homes and power lines, and claiming the lives of fishermen who were out on the waters. We immediately mobilized food relief camps, often in conjunction with local churches. We also announced a package of $1,500 for each family in which a fisherman had died and made a pledge to help rebuild houses destroyed by the cyclone.


As families continued to recover more than two months later, Swami Amritaswarupananda presented a cheque for $300,000 to the Chief Minister of Kerala, Pinarayi Vijayan, to contribute to the state’s special Ockhi relief fund. 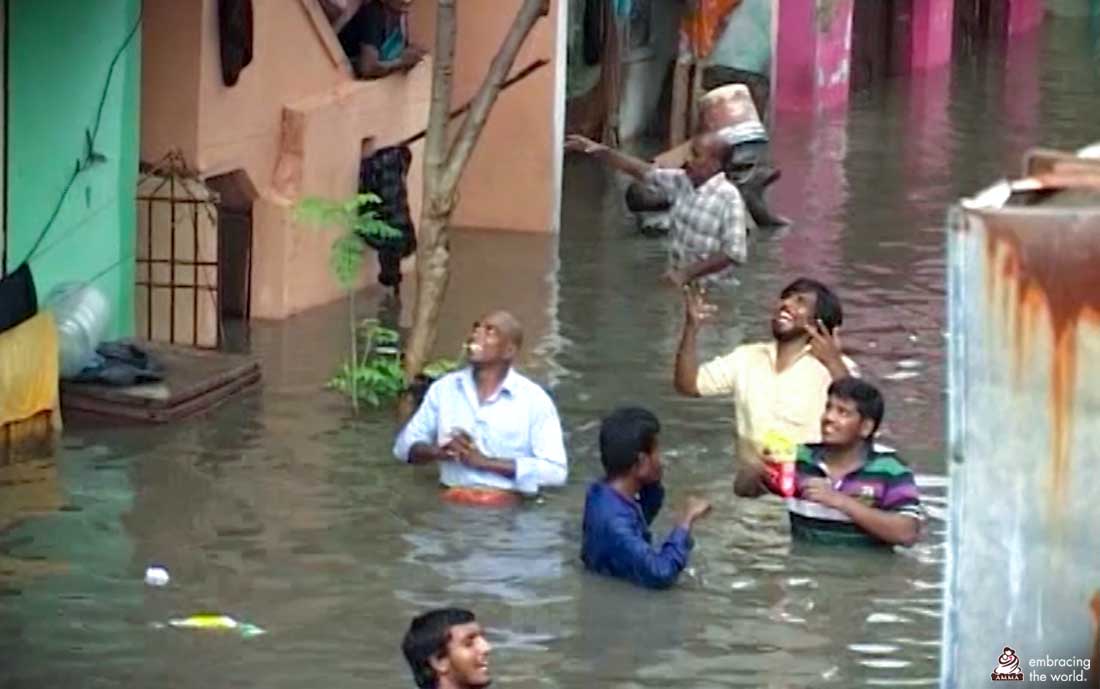 
Some volunteers used boats to pull people out of deep waters. Twenty-five doctors rushed to affected areas and Amrita Hospital sent a Mobile Telemedicine Unit, a vehicle equipped with several emergency facilities including a mini-operation theatre. In the following days, $750,000 was given to Tamil Nadu’s Chief Minister to contribute to a relief fund for further assistance. 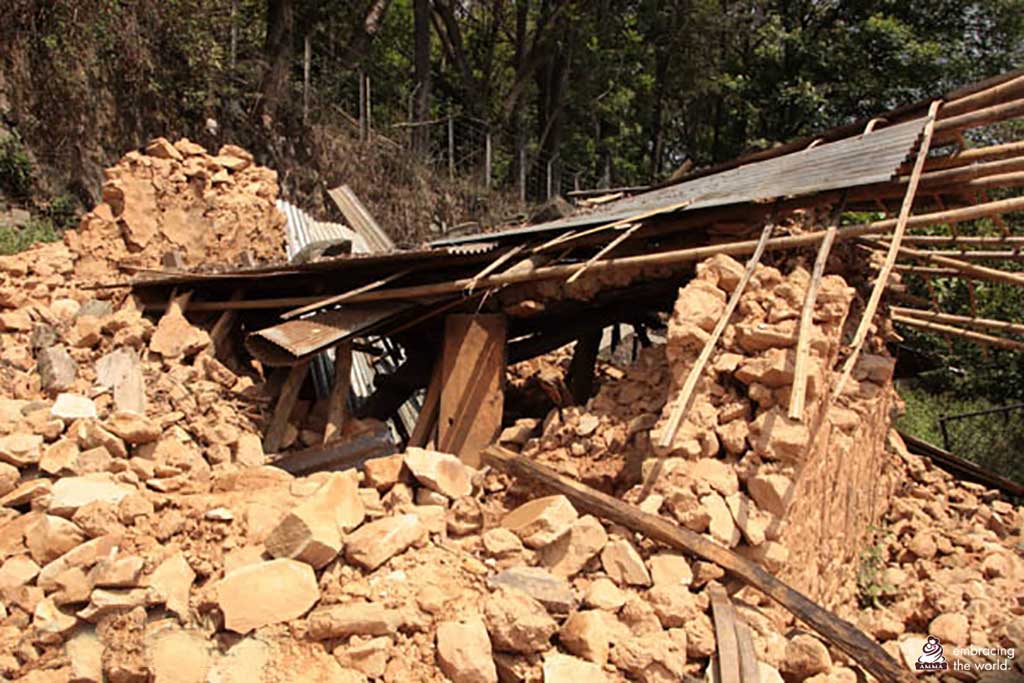 The Nepal earthquake killed nearly 9,000 people and injured 22,000. Embracing the World sent basic provisions such as rice, lentils, clothing and blankets. Many people were rendered homeless, so we began a distribution of tin sheets for roofing that could be used for temporary shelter and afterwards long-term construction.


We provided two tons of essential medicines and surgical items as well as 100,000 Tetanus shots - an essential health requirement in the aftermath. The Prime Minister of Nepal remarked, “With the compassion and aid from a great humanitarian like Amma, I feel the burden on my shoulder lessened.”

OUR WORK
GETTING MEDICAL CAMPS ON THE GROUND 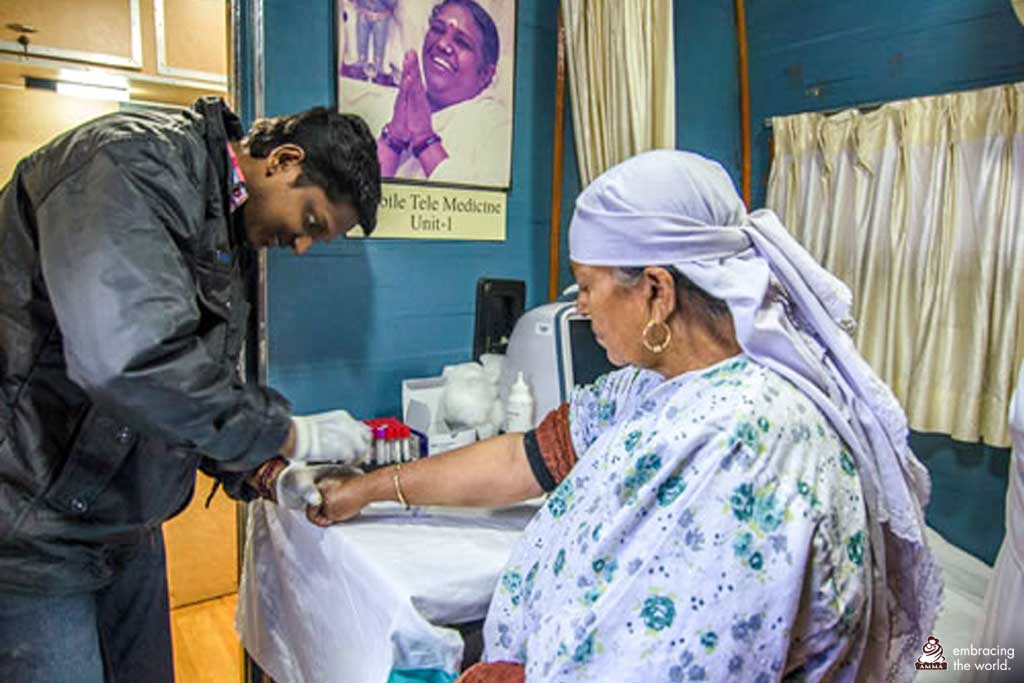 During the last stage of monsoon, massive floods swept through Jammu & Kashmir. Nearly 300 people were killed on the India side of the border with another 300 people in Pakistan. Much of the city of Srinagar was completely under water. About 2,600 villages were flooded with 390 of those completely submerged.


Embracing the World sent two Mobile Telemedicine Units to the disaster zone, and a team of 15 medical specialists and paramedics provided critical care. On the first day, more than 2,300 people were examined in less than seven hours. We also pledged a $4 million relief package that included medical care, essential supplies, construction of houses for the displaced, and monetary aid for widows. 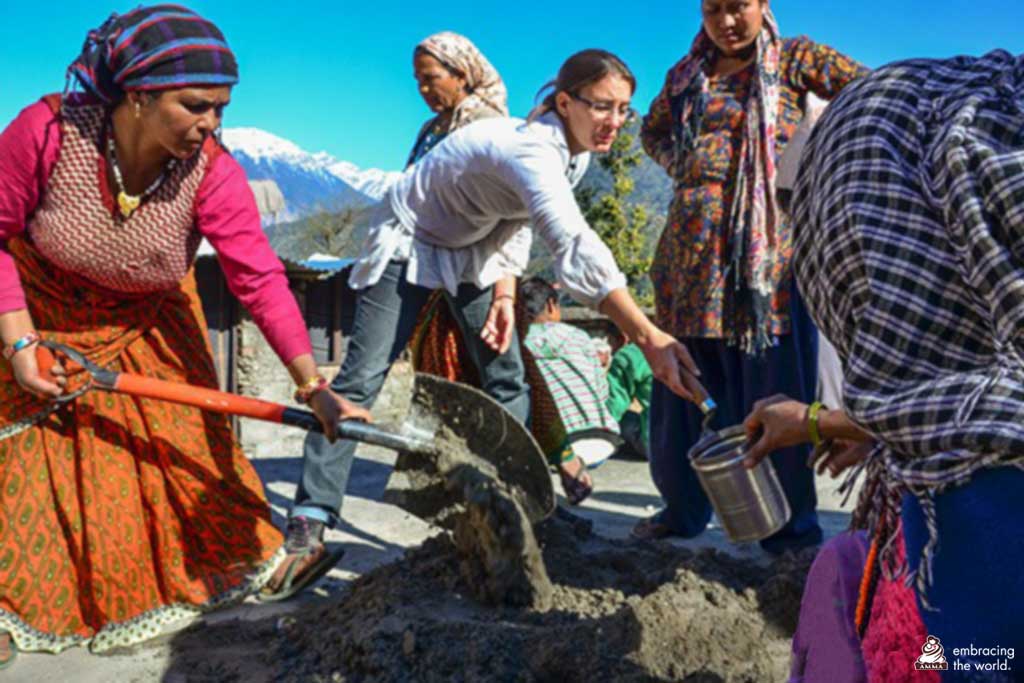 Extremely heavy rains led to floods in the mountainous state of Uttarakhand and caused major landslides. More than 5,000 people were declared dead and many of the surviving lost their homes. Embracing the World immediately held medical camps to treat the injured, especially for dysentery as this can easily become an epidemic.


In the long-term, we started a $7.5 million relief and rehabilitation project. Five hundred homes were built for people who had theirs washed away. We also established scholarships for poor children, provided pensions for widows and disabled people, built an orphanage and care home for children, and assisted women in forming self-help groups (SHGs) so they could set up home-based businesses.

OUR WORK
BUILDING SCHOOLS AND ESTABLISHING SCHOLARSHIPS FOR ORPHANED CHILDREN 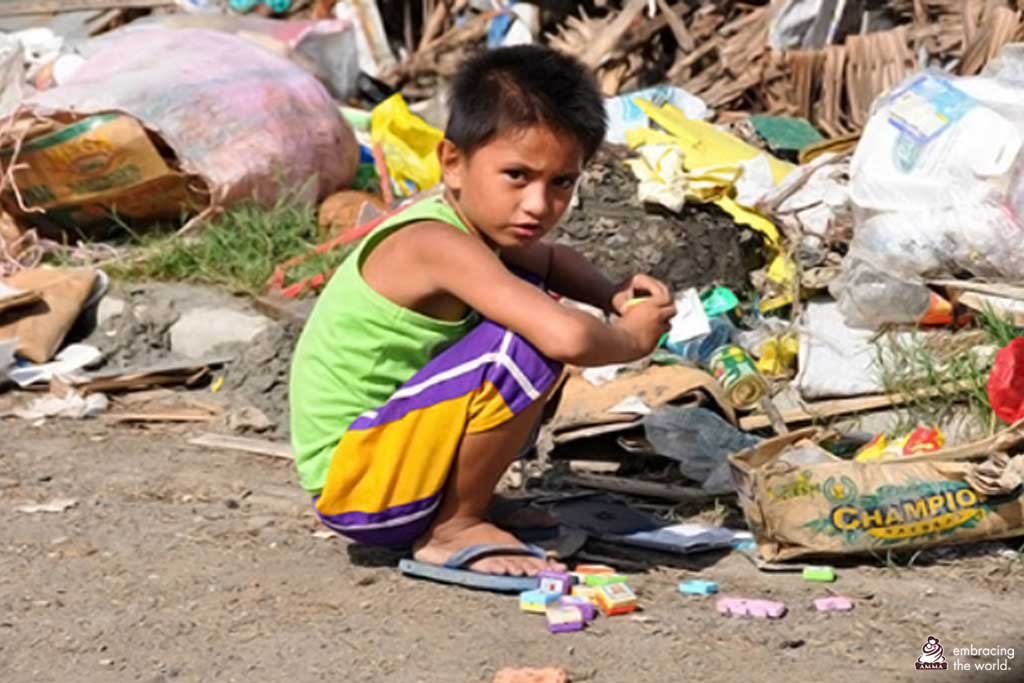 The devastating storm hit the Philippines in 2013, killing more than 6,300 people and displacing about 750,000 more. In the hardest hit areas, more than 80 percent of all buildings were destroyed, and the financial losses for the country were in the billions.


Embracing the World activated relief teams based out of Manila, Japan and Singapore and donated $1 million to help those affected. The funds went to reconstructing schools, building community centers and providing scholarships to 530 children who were victims of the storm. The focus was on children who lost one or more parents. Five years later, 480 of those students were able to celebrate their graduation from high school.

OUR WORK
FOCUSING ON A REMOTE COASTAL TOWN 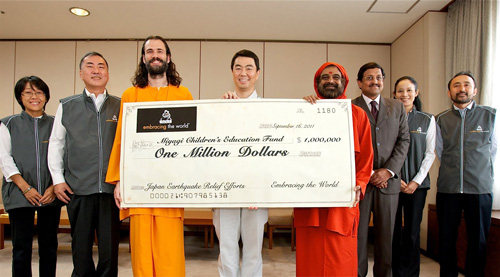 Within three days, our volunteers were on the ground distributing food and water for the refugees. After working near the disaster's epicenter, we soon focused on Rikuzentakata, a remote coastal town of 23,000 people where more than a third of the population had lost their lives. Later that year, we donated $1 million to pay for the education of children orphaned by the disaster.

OUR WORK
HELPING CHILDREN WHO BECAME ORPHANS TO GET AN EDUCATION 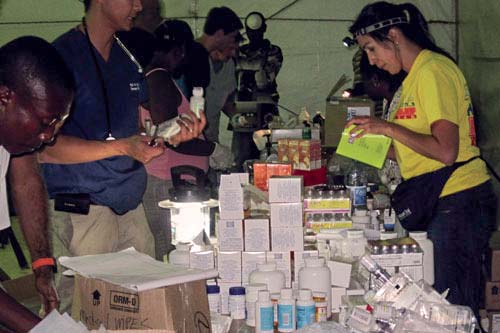 After the catastrophic earthquake struck Haiti in January 2010, we shipped 11 palettes of medical supplies to Haiti, where they were received by Partners In Health. We also distributed staple foods to refugees on the ground, and identified 30 children who had lost parents or other close relatives in the disaster and been forced to drop out of school. We provided scholarships for those 30 children, which got all of them to return to school.

OUR WORK
1,000 HOUSES FOR DISPLACED REFUGEES 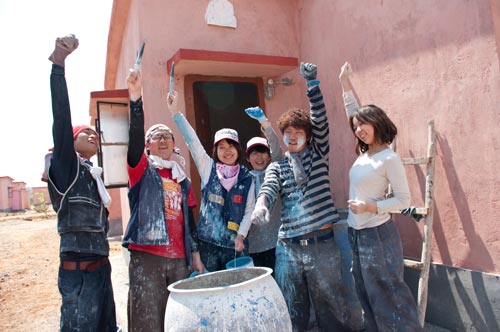 In 2009, the Indian states of Andhra Pradesh and Karnataka were ravaged by unprecedented floods, destroying millions of acres of crops and displacing 2.5 million people. In response, we announced a $10.7 million relief package for the flood survivors in both states. Just 20 days after entering into an agreement with the Government of Karnataka to provide new homes for displaced flood survivors there, we had already completed 100 new houses. And that was just the beginning. 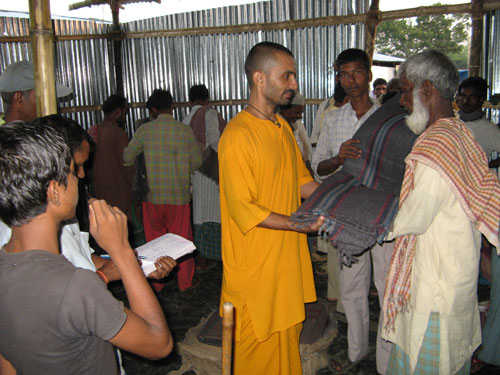 In 2008, one million people were rendered homeless in Bihar when the Kosi River over- flowed its banks. We pledged $465,000 in relief. Our medical teams remained on the ground for more than two months, treating 50,000 people. We also distributed thousands of tents, blankets and tarpaulins along with cooking stoves and vessels, food, clothing and school supplies. A government official there commented about our volunteers, "I wonder if they are even sleeping at night! We are very thankful to them for accepting our appeal and rushing to help us in this time of need." 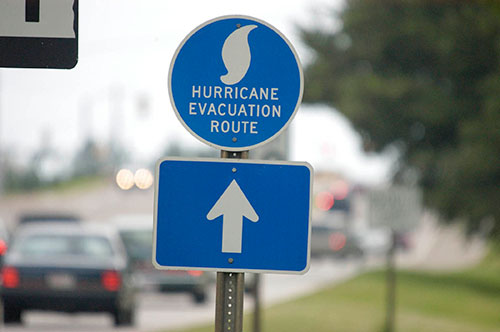 Following hurricanes Katrina and Rita, more than 100 Embracing the World service groups throughout North America responded by delivering food, clothing, school supplies and other essential items to the refugees. Our volunteers visited relief sites and provided medical care and emotional support. We also helped the displaced to locate one another via a dedicated website we built for the survivors. In December 2005, we donated $1 million to the Bush-Clinton Katrina Fund. 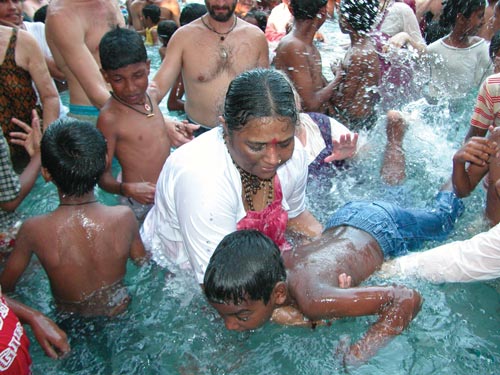 The relief and rehabilitation work conducted by Embracing the World in the wake of the 2004 Indian Ocean Tsunami stands today as one of the most multi-faceted, comprehensive and sustained disaster-relief projects ever undertaken by a nongovernmental organization. What made our work unique was its holistic nature - every aspect of the tsunami survivors’ lives was considered and improved. In the end, many survivors stated that in terms of their quality of life and economic independence, they were better off after the tragedy than they had been before.

OUR WORK
THREE VILLAGES REBUILT FROM THE GROUND UP 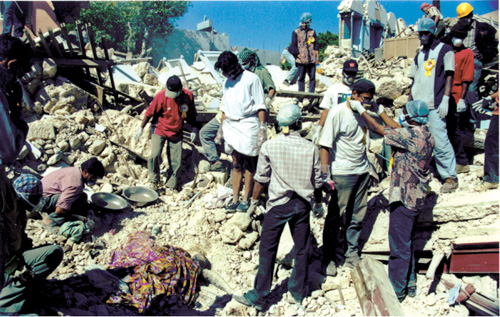 In 2001, Gujarat suffered a devastating earthquake. 20,000 people lost their lives. Amma dispatched a disaster relief team of 12 doctors, two ambulances and 100 student volunteers from Amrita University. Ultimately we adopted three entire villages, rebuilding 1,200 homes from the ground up, as well as community centers, a church, a mosque and a temple.

In the fall of 2017, hurricanes devastated multiple Caribbean Islands including Puerto Rico. Infrastructures for electricity, agriculture, drinking water and telecommunications were destroyed along with many homes and buildings. Months later, many of Puerto Rico's residents were still living without power and were in desperate need of help. In response, Embracing the World volunteers at MA Center in San Ramon, California collected 3,000 pounds of food and other essential items as donations. These items were transported to Puerto Rico and distributed to one of the communities most in need.

MEDICAL AID AND MORE FOR CYCLONE REFUGEES IN WEST BENGAL

In May 2009, Cyclone Aila hit West Bengal and Bangladesh, leaving 330 people dead and one million homeless. Medical camps ran for 10 days, with our doctors treating approximately 3,000 people, dispensing more than 2,000 worth of free medicine. Our volunteers also distributed approximately 800 articles of clothing and blankets, served 6,000 free meals and gave away two tons of rice.

$1 MILLION IN MEDICAL AID FOR FLOOD SURVIVORS IN MUMBAI 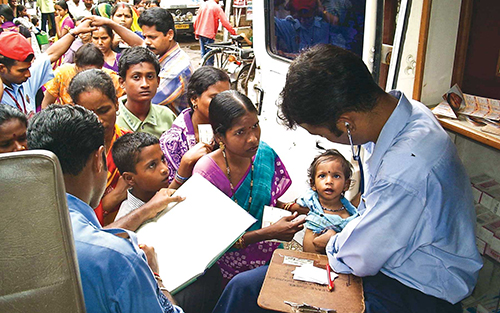 In 2005, torrential floods displaced millions in Mumbai, especially slumdwellers whose makeshift houses were washed away. We immediately provided food and blankets for the refugees. Medical teams treated more than 50,000 patients and distributed $1 million in medicines.